Celebrating Rakhi: What is it about & how is it celebrated?

Celebrating the sacred relationship of siblings, Raksha Bandhan is one of the most important Hindu festivals. The sister ties the sacred thread of rakhi on her brother's wrist and wishes for his happiness and good life. In return, the brother gives his blessing and promises to protect his sister through thick and thin. With years, Rakhi rituals are also changing - like exchanging gifts or tying rakhi to a sister. It makes us wonder if the celebration was different years ago and how the festival came to be. We dug a little deep and found out some fascinating stories associated with Raksha Bandhan. Check out these 10 Rakhi stories that you probably didn't know.

1. Indrani tying a rakhi to her husband Indra

In Hindu mythology, it's believed that the first rakhi was tied to a husband and not a brother. Indra's wife Sachi consulted Lord Krishna during a war between gods & demons. He gave her a holy cotton bracelet to tie around Lord Indra's wrist to protect him from all evil. The story proves the power of the holy thread and that the festival is not exclusive to a brother-sister bond.

2. Yamuna tying a rakhi to her brother Yama

Yamuna, Yama's sister was sad when her brother didn't visit her for around 12 years. On a gentle reminder by Ganga, when Yama decided to visit his sister, she was so happy that she prepared a grand meal for him and tied a rakhi on his wrist. Yama, moved by his sister's love, blessed her with immortality.

According to the Mahabharata, one time when Lord Krishna was flying a kite, he cut his finger. Seeing this, Draupadi immediately tore a piece of cloth from her saree and tied it around his finger. Touched by her action, he promised to protect her. As we all know, he came through with that promise when her husbands lost in gambling in King Dhritrashtra’s court. 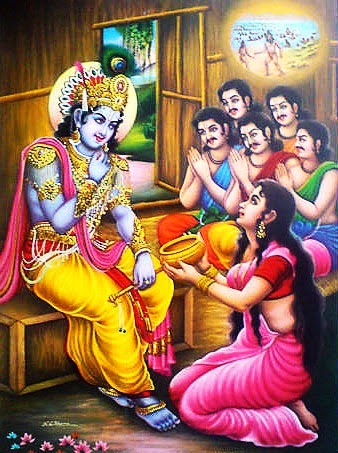 According to Vishnu Purana, Bali, a devotee of Lord Vishnu, asked him for protection. Lord Vishnu accepted his request and stayed with him in disguise as a doorman. Back home Goddess Laxmi, his wife, missed him and went to Bali in disguise as a woman seeking shelter. When Bali opened his doors to her, she returned the favor by tying a colored cotton thread on his wrist for his protection. When Bali asked her what she wanted as a gift in return, Laxmi asked to grant leave to her husband, who now revealed his identity. As Laxmi was now his sister and he made the promise to grant her wish, he agreed.

5. The birth of Santoshi Ma

When Mansa was tying a rakhi to her brother Ganesha, his sons Shubh & Labh also expressed a desire to celebrate the festival and asked their father for a sister. Lord Ganesha fulfilled their wish by creating a daughter from fire, and that is how Santoshi Ma came into existence.

Before the war of Kurukshetra, King Yudhishther was worried about his brothers, the Pandavas. He sought Lord Krishna for advice on how to protect all his brothers from the impending doom. Lord Krishna advised him to perform a ceremony, where on the full moon day of the month Shravana, a priest will tie a rakhi around his right wrist for protection.

7. Roxana saved her husband's life by sending a rakhi

During the battle of Hydaspes, Roxana sent a rakhi to Porus and asked him not to harm her husband, Alexander. On the battlefield, when Porus saw the rakhi on his wrist, he refrained from attacking Alexander. He lost the battle but gained Alexander's respect who let him be the governor of his kingdom and granted him more land to govern.

When Rani Karnavati of Chittor was ruling her kingdom, it was attacked by Bahadur Shah of Gujarat. The Queen was looking for support from other kingdoms. She sent a rakhi and requested protection from Humayun, who himself was in the middle of a battle. On receiving the letter, Humayun left everything and went to Mewar. Sadly, he arrived too late and, the Rajput family was defeated. According to the custom, Rani Karnavati performed Johaur to save her dignity. But true to his promise, Humayun later defeated Bahadur Shah Zafar and restored the kingdom to her eldest son, Vikramjeet.

Maharani Jindan, the wife of the founder of the Sikh empire Maharaja Ranjit Singh, sent a rakhi to the ruler of Nepal. When the Sikh empire was conquered by the British in 1849, Jung Bahadur of Nepal gave her refuge and provided her protection.

During the Partition of Bengal, Rabindranath Tagore started Rakhi Mohotsav to strengthen the bond between Hindu & Muslims of Bengal. He encouraged them to support each other and protest against the Britishers together. Continuing that tradition, the people of West Bengal tie rakhi to their neighbors and close friends. It is a symbol of love, mutual respect, and brotherhood.

It is difficult to pinpoint exactly when the tradition of Raksha Bandhan started, but we can be sure of one thing - it is about the strong bond between the people observing the ceremony. Rakhi can be celebrated among siblings, partners, or even neighbors. Although, nowadays, we primarily celebrate it as the bond between siblings and their promise to protect and support each other.

If you are celebrating Rakhi and want to tie the best Rakhi to your brother or sister, check out our specially curated Rakhi collection. We not only have the most unique rakhis online, but we also provide great delivery service. So even if you cannot be with your sibling this Rakhi, we won't let them feel your absence. Send us a message, and we will include a sweet hand-written note with your parcel. If you're looking for rakhi gifts for sister, we have a special collection for that too. Browse bigsmall.in for more quirky gifts this Rakhi season.

Have a safe and happy holiday!